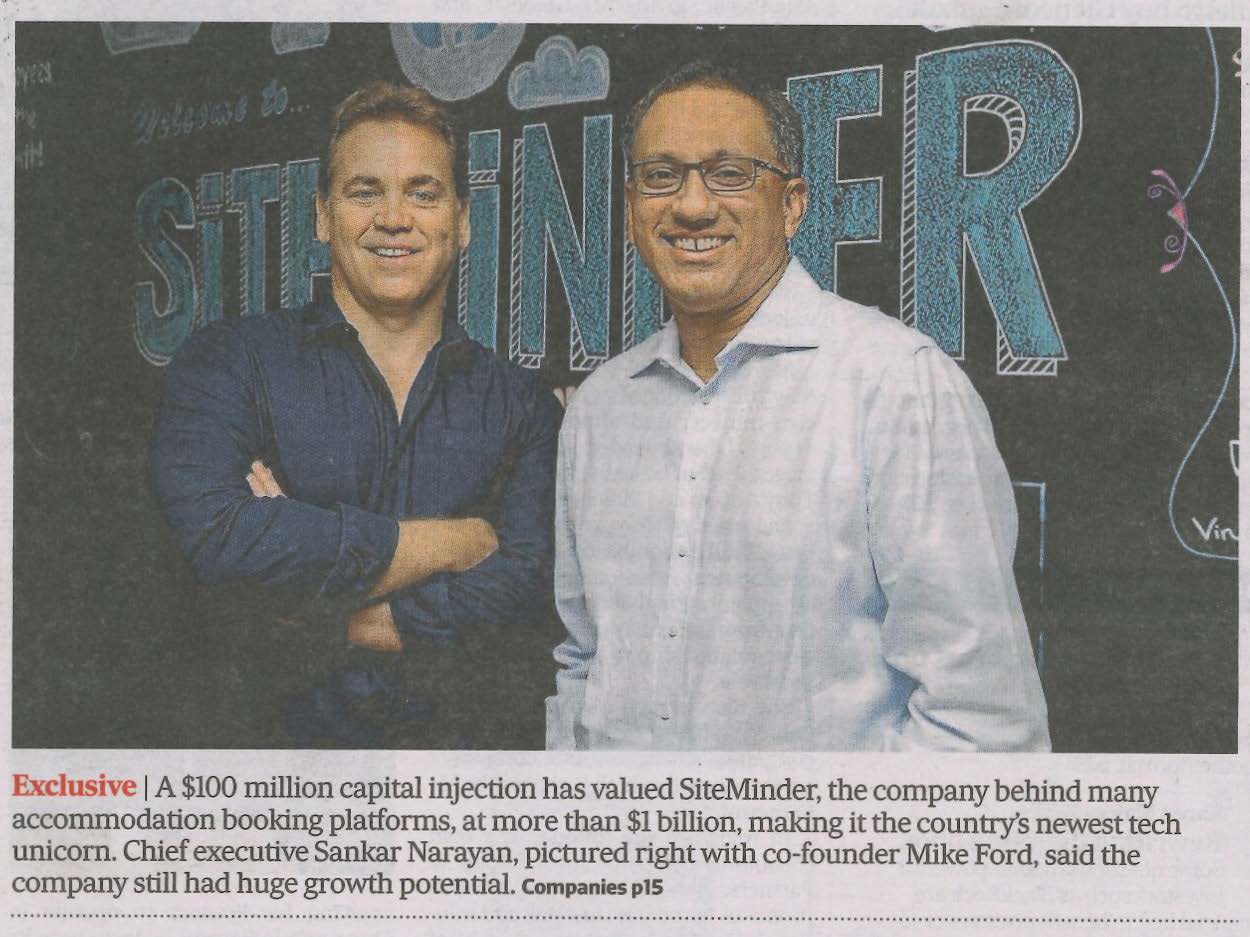 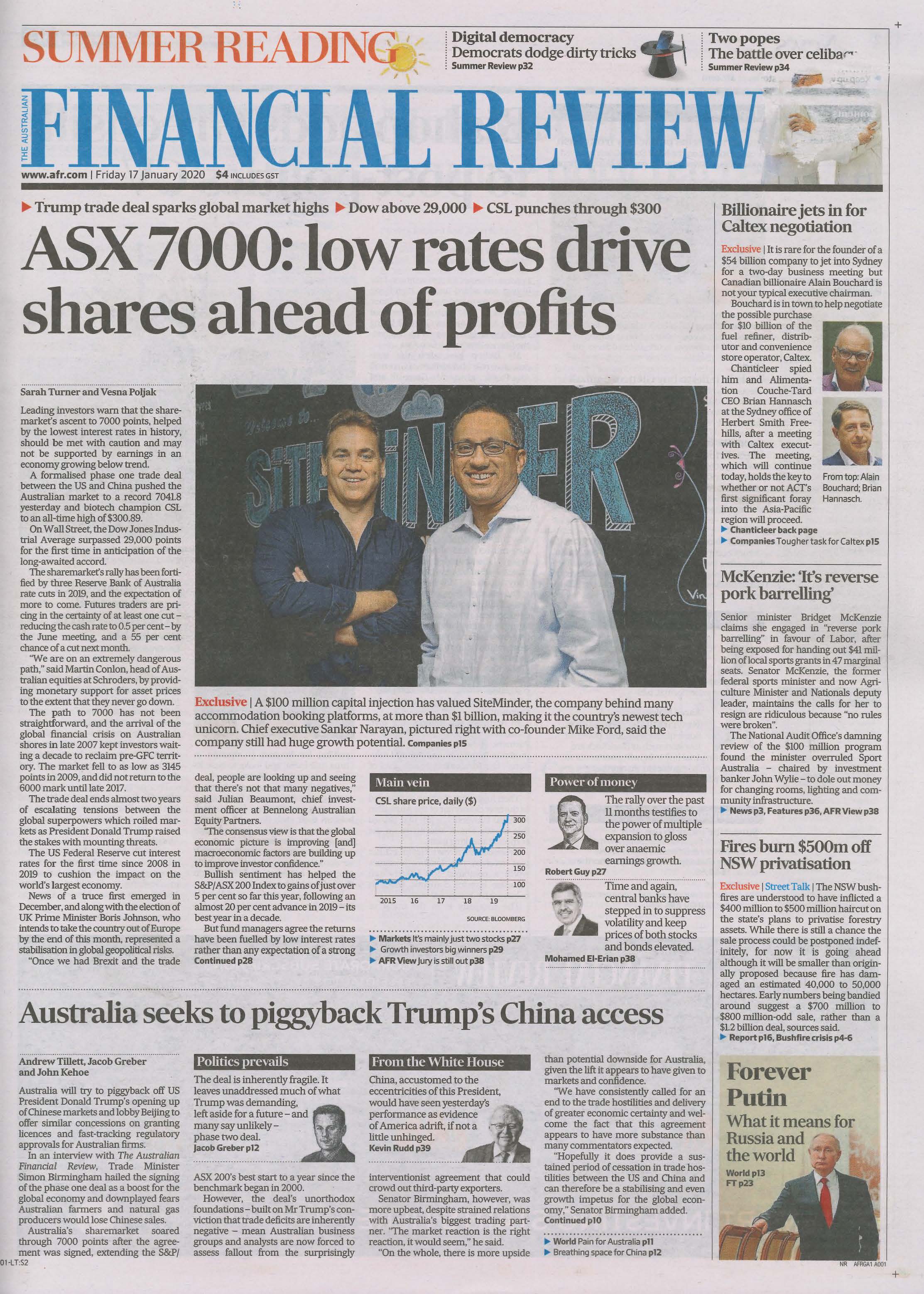 The business provides the core technology that has allowed websites such as Agoda and Booking.com to boom, connecting hotels' back-end systems to those of the booking websites so all systems can be updated simultaneously, regardless of whether a booking is made via the hotel or a third-party site.

The capital raise comes on the back of the company cracking the lauded $100 million in revenue run rate milestone in May last year.  The latest capital raising values the company at $1.1 billion.

The business would not reveal the precise amount it had raised, but speaking to The Australian Financial Review, chief executive Sankar Narayan said it had set out in mid October with the target of raising $100 million and that had been comfortably exceeded.

"We had such strong demand from investors of the highest quality that we increased the size of the round," he said.

"Looking at hotel tech around the world, it's actually still quite limited in terms of connectivity. Less than 50 per cent of all accommodation sales are done online.

"There's a huge global market opportunity for us and we're the clear market leader around the world. We want to keep building out the tech platform and push into new markets across various segments and deepen our relationship with customers through new products as well."

The funding round is also good news for existing investors including Bailador, whose stake is now worth at least $92.4 million (a gain of 569 per cent on its initial investment) and Silicon Valley fund Technology Crossover Ventures, which led the travel tech company's $US30 million ($43.4 million) raise in 2014.

The fresh $100 million-plus raise will go towards the company's continued geographic expansion, particularly across Europe, as well as its product development.

It precedes a likely initial public offering, which Mr Narayan said the business was targeting within the next 24 months, but was not an immediate priority.

"We have a lot of ambitions and growth initiatives planned for the next 24 months and we want to execute on those and get some early results on those initiatives as well, before listing."

Mr Narayan, who was the former chief financial officer and chief operating officer at Xero, took on the top job at SiteMinder in November 2018.

Co-founder and chairman Mike Ford had started the business alongside friend Mike Rogers in 2006, having realised there was no way for hotels to exchange booking information with the websites they listed their rooms on.

Having started in a rental apartment in Sydney, offering the software to hotels for free in the early days to prove its effectiveness, the friends had grown the business to 30,000 accommodation providers by late 2018, but Mr Ford realised it was time to beef up the company's leadership with some more experienced hands to take it to the next level.

"[Appointing Sankar] has actually gone better than I'd imagined. You always hope a big move like that goes well, but it's always fraught with risk," Mr Ford said.

"My passion has always been on the strategy and product side and I wanted to get my focus back to that.

"I'd run really hard as CEO for 13 years ... I was context switching a huge amount ... and I reflected on where my passions lay and looking ahead, I knew we'd scale significantly and that we needed to bring on not just a new CEO but other leadership."

Today SiteMinder counts 35,000 hotels worldwide as clients and processed 105 million bookings through its platform in 2019.

About 80 per cent of its revenue is generated from offshore, with the business having 900 staff in six offices spanning Sydney, Bangkok, Dallas, Galway, London and Manila.

According to documents filed with the Australian Securities and Investments Commission, the company generated $96.8 million in revenue for the year to June 30, 2019,  and a modest net profit of $162,000.

Much like Xero or Salesforce, in addition to its bookings platform, SiteMinder has also launched an app store with 800 partners to connect hotels with new technologies being created to help them run their businesses.

AustralianSuper's Australian small caps analyst, George Batsakis, said the superannuation fund had been tracking the business for some time and leapt on the opportunity to buy in.

"We think it's a great business model, with lots of growth, and it suits AustralianSuper's investment mantra. We're a provider of long-term, patient capital."

The direct investment from AustralianSuper in SiteMinder comes after the super fund also bought into AirTree Ventures' latest $275 million fund last year. It also made a direct investment into alternative property financing platform Athena Home Loans in 2019 and is a backer of medical innovation fund Brandon Capital.

Like the super fund, Ellerston Capital was already keen to invest in SiteMinder ahead of its capital raise.

The specialist investment manager took a stake in the company via its new JAADE Australian Private Assets Fund. Investment director Jamie Odell said SiteMinder was the fourth company it had backed via the nine-month-old fund, alongside Tyro, Mable and risk management platform Camms.

He said there was still a large opportunity for the company to go after independent hoteliers, which he estimated made up 70 per cent of the global market of 1 million properties.

"This is a standout investment ... At the start of 2019, we did some research into potential investments and SiteMinder came onto our list then," Mr Odell said.

"It was already an established product that was supporting so many front-end booking sites, but it was almost invisible as a consumer app so it was quite unknown really and had been flying under the radar. "

Watch a demo of the Straker RAY platform