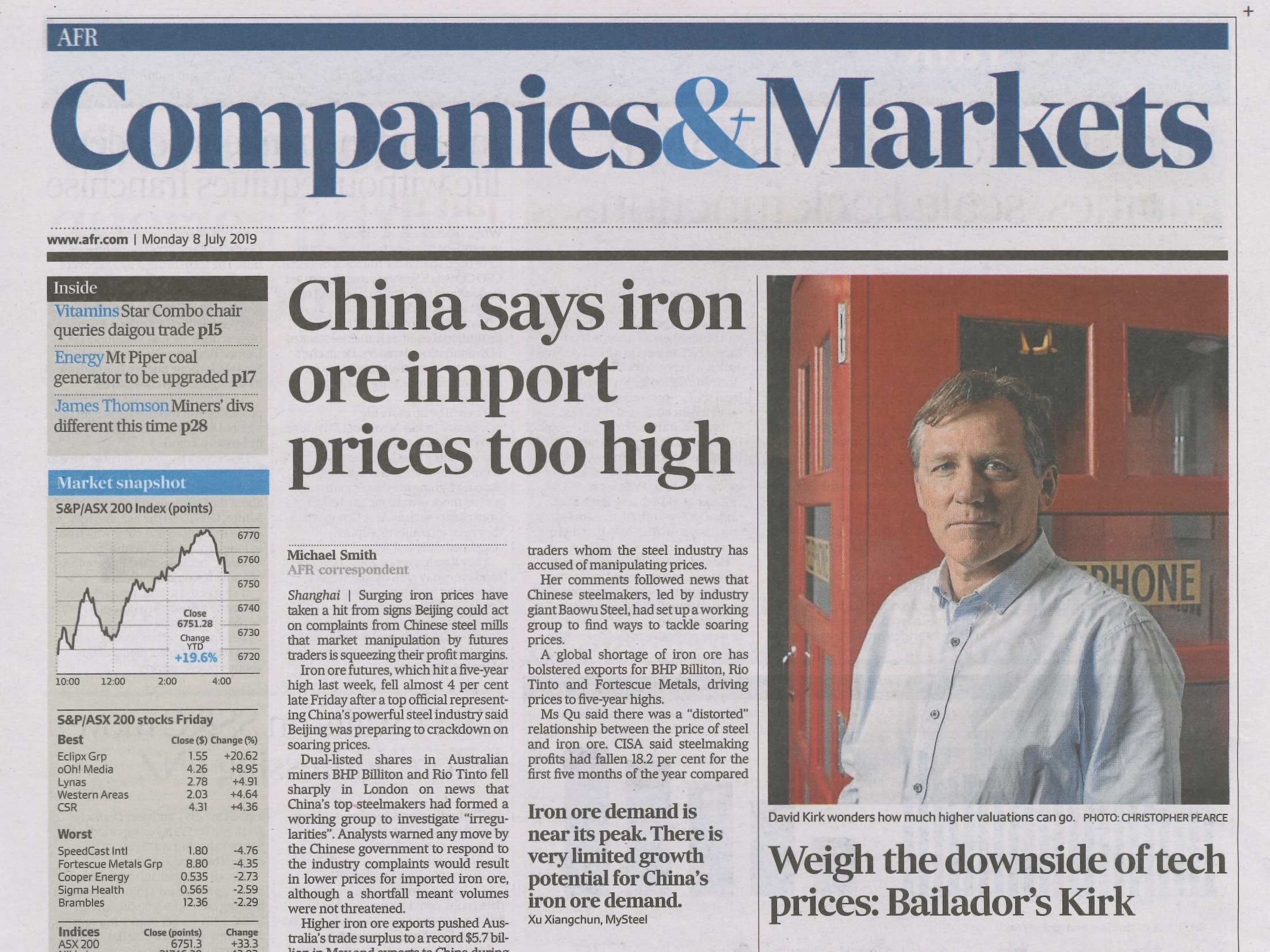 Via the Australian Financial Review

The share prices of listed Australian technology companies "are what the market says they are," David Kirk declares.

But as co-founder of Bailador Technology Investments, an ASX-listed venture capital fund, he is conscious of the premium attached to high-profile technology companies in this market.

"If you're going to invest in a listed company that's [valued] at 25-30 times revenue, that's obviously quite a risky proposition," Kirk says.

"You just wonder how much higher valuations can go and there's always risk on the downside."

The former Fairfax Media chief executive and All Blacks captain joins a number of market participants who are questioning the multiples assigned to local technology companies, but Kirk does not "want to be quoted as saying prices are too high".

The jewel in the crown is Bailador's stake in Siteminder, a business which has just eclipsed $100 million in annual revenue.

At the centre of the debate are Wisetech, Afterpay, Altium, Appen, and Xero, known by the acronym WAAAX.

Excluding Afterpay and Xero, the average price-to-earnings (P/E) ratio for the rest of the WAAAX basket is 91.2. The S&P/ASX 200 and the Nasdaq trade at 17.45 times and 19.97 times respectively.

But with a portfolio of 10 growth-stage technology businesses, Bailador's investors are likely hoping these stocks will be elevated to the same rarefied company.

The businesses backed by Bailador are predominantly software-as-a-service businesses. All but one are private – language translation company Straker Translation listed in October last year.

But Bailador has the opposite problem to the high-profile WAAAX companies. The fund's share price trades at a discount to its net tangible assets (NTA), the value of assets in the portfolio after liabilities and intangibles like goodwill are deducted.

Kirk acknowledges the discount arises due to additional risk. The businesses in the fund are nascent ventures and do not individually release financial reports to the market.

He also argues, however, that Australia's lack of familiarity with technology also weighs on the fund's share price.

"People invest in what they know," he says. "What Australia does of course: lots of minerals, lots of retail, lots of financial services."

In comparison to the US, the relatively small technology sector means this lack of understanding also extends to institutions, Kirk adds.

"I think there are fewer analysts or your managers of funds who have got genuine and deep tech experience."

For new technology companies, it just takes time for investors to become comfortable with the business and its management, Kirk explains. But once that happens, with relatively few quality tech companies represented on the ASX, the interest from investors looking for growth can be significant.

This is particularly the case for business-to-business tech companies, where products or services don't have the same recognition factor as consumer tech, Kirk adds.

"I think it just takes time to get comfortable and I think that's what happened with Straker."

Straker provides translation services, which includes automating website reproduction into other languages. A large portion of its customer base is other businesses.

The company listed in October last year at $1.77 per share for a market capitalisation of $52.6 million. The stock floundered in its first three months, falling to a low of $1.17.

But following the release of its first annual report to the exchange on June 27, the share price surged; last week the stock closed at $2.10 and is now worth about $111 million.

The first full-year results for Straker since floating showed annual revenue of close to $25 million, which Kirk says is a key factor when determining whether a company is ready to go public.

"For us it's about predictable earnings," he notes. "What you're looking for is a predictable revenue growth model. You're listing a company because you think it's going to grow strongly, and that needs to be pretty predictable."

"There's a lot of things you need to do to set the company up for success in a listed life," Kirk says.

"Your founder or chief executive needs to be good at, or able to learn how to run a public company. And you need to have good bench strength around him or her."

Kirk emphasises the importance of maturity and scale to any company considering an IPO.

"Even then when you've listed, it takes some time as a listed company to get the confidence of the market, so you need to have good investor relations afterwards.

"And that's one of the reasons to get a company with a little scale because you're not going to get any coverage from analysts or share brokers if you've got a very small company."

For this reason, Kirk says that he would not take a company public with a valuation below $100 million.

One of the companies in Bailador's portfolio has just eclipsed $100 million in annual revenue.

SiteMinder, the fund's "jewel in the crown", provides software to accommodation providers. The company is headed up by the former Xero executive Sankar Narayan, who is also a non-executive director of Bailador (and a former chief financial officer of Fairfax and Virgin).

Learning from the past

In Bailador's latest market update, the company says the revenue milestone for SiteMinder "is widely considered an indication a technology company is on track to achieving ‘unicorn’ status".

Naturally, Bailador has experienced the traps of early stage investing. The fund has written off one investment and written another one down.

"We've learnt a lot from our mistakes," Kirk professes. "We expect to be able to recognise the potential pitfalls more easily."

In 2017 Bailador wrote off $8.5 million when risk management software company iPro was placed into administration.

"We hope very much not to be in the position to lose capital again. That's the most frustrating thing in the world."

Bailador also wrote down the value of its investment in video streaming company Viostream in 2018. The convertible preference shares it owned were revalued from $23 million to $7.4 million. Bailador now values the holding at $7.8 million.

"We expect some of our investments won't go as well as we hope for when we made the investment and it will be our job to do our best to try and help them go well, but also exit them quickly and effectively if the business does not get us the growth we expect."

As head of Fairfax Media between 2005 and 2008, Kirk witnessed the disruption brought about by emerging technology businesses first hand.

Kirk says that while audiences are turning back to trusted newspaper mastheads, it remains a challenging competitive landscape for traditional media.

Kirks adds that 9Voyager, a new advertising platform from Nine targeting small to medium-sized businesses, is heading in the right direction. The platform was released by Nine, the publisher of The Australian Financial Review, in the last two weeks.

"That's the sort of thing these organisations need to do, which is to experiment and innovate and look at the models that are succeeding and ask why they are succeeding."