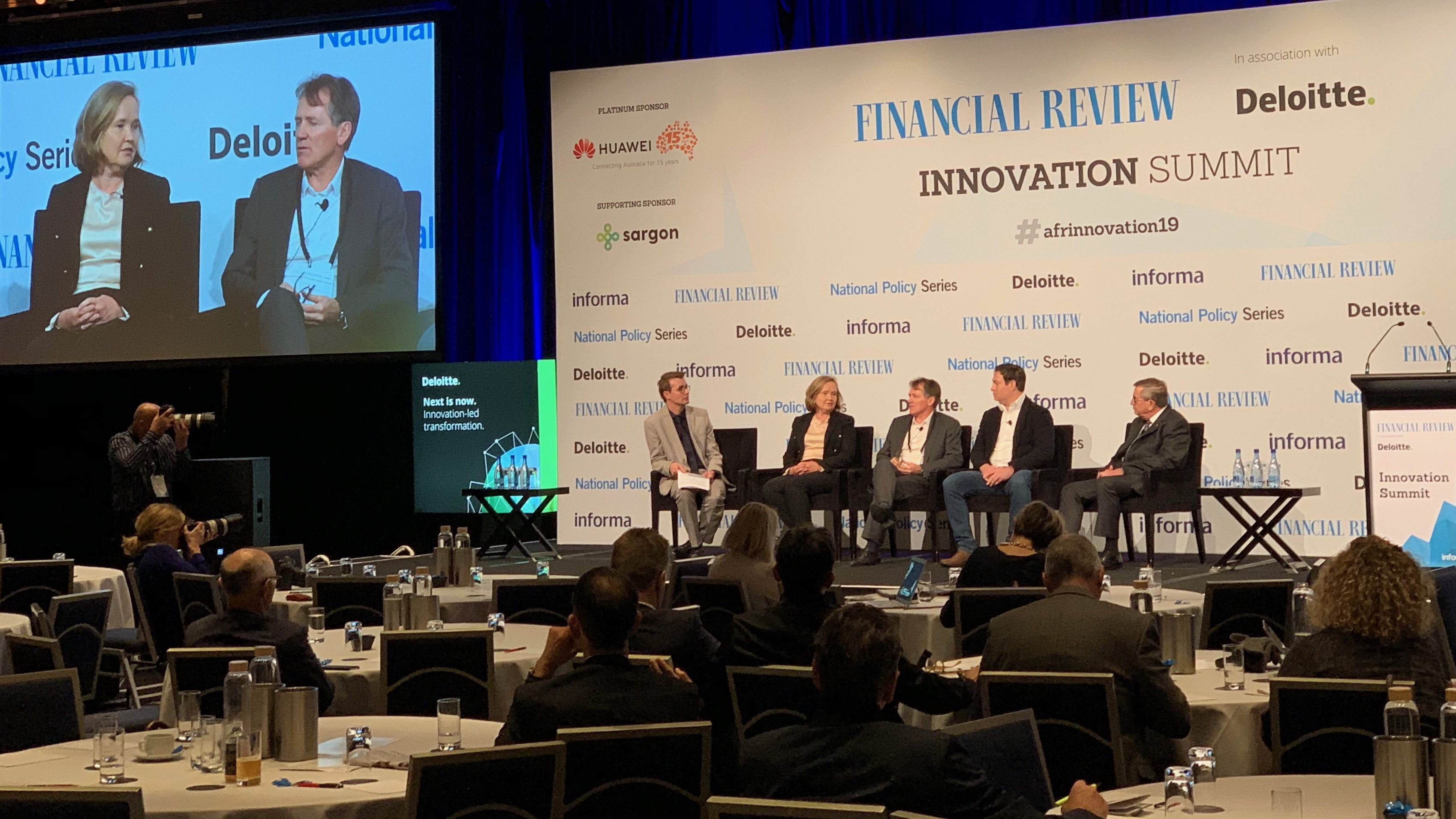 AFR - Investors urged to ramp up board grilling 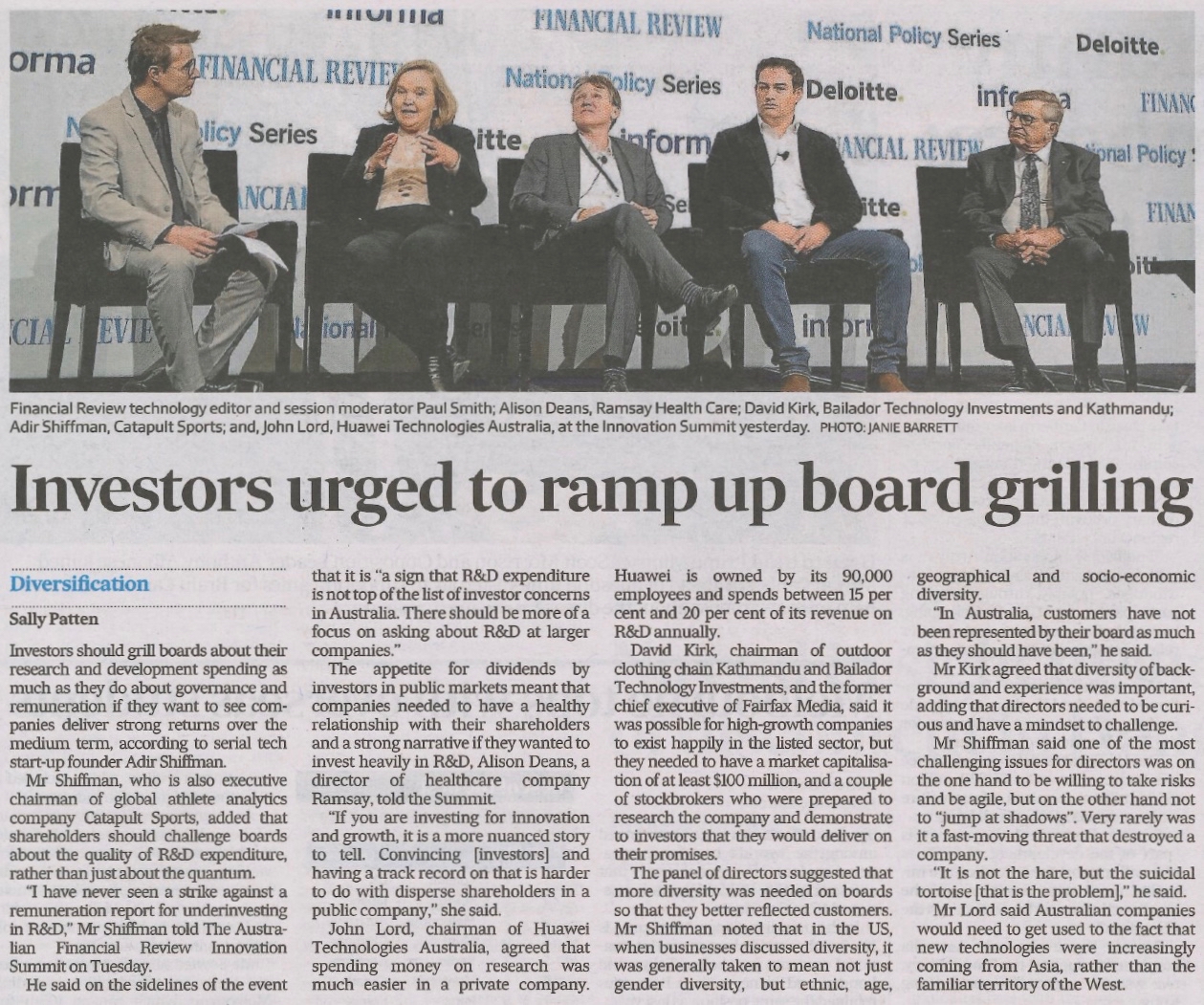 Investors should grill boards about their research and development spending as much as they do about governance and remuneration if they want to see companies deliver strong returns over the medium term, according to serial tech start-up founder Adir Shiffman.

Mr Shiffman, who is also executive chairman of global athlete analytics company Catapult Sports, added that shareholders should challenge boards  about the quality of R&D expenditure, rather than just about the quantum.

"I have never seen a strike against a remuneration report for underinvesting in R&D," Mr Shiffman told The Australian Financial Review Innovation Summit on Tuesday.

He said on the sidelines of the event that it is "a sign that R&D expenditure is not top of the list of investor concerns in Australia. There should be more of a focus on asking about R&D at larger companies."

The appetite for dividends by investors in public markets meant that companies needed to have a healthy relationship with their shareholders and a strong narrative if they wanted to invest heavily in R&D, Alison Deans, a director of healthcare company Ramsay, told the Summit.

"If you are investing for innovation and growth, it is a more nuanced story to tell. Convincing [investors] and having a track record on that is harder to do with disperse shareholders in a public company," she said.

John Lord, chairman of Huawei Technologies Australia, agreed that spending money on research was much easier in a private company. Huawei is owned by its 90,000 employees and spends between 15 per cent and 20 per cent of its revenue on R&D annually.

David Kirk, chairman of outdoor clothing chain Kathmandu and Bailador Technology Investments, and the former chief executive of Fairfax Media, said it was possible for high-growth companies to exist happily in the listed sector, but they needed to have a market capitalisation of at least $100 million, and a couple of stockbrokers who were prepared to research the company and demonstrate to investors that they would deliver on their promises.

The panel of directors suggested that more diversity was needed on boards so that they better reflected customers. Mr Shiffman noted that in the US, when businesses discussed diversity, it was generally taken to mean not just gender diversity, but ethnic, age, geographical and socio-economic diversity.

"In Australia, customers have not been represented by their board as much as they should have been," he said.

Mr Kirk agreed that diversity of background and experience was important, adding that directors needed to be curious and have a mindset to challenge.

Mr Shiffman said one of the most challenging issues for directors was to on the one hand to be willing to take risks and be agile, but on the other hand not to "jump at shadows". Very rarely was it a fast-moving threat that destroyed a company.

"It is not the hare, but the suicidal tortoise [that is the problem]," he said.

Mr Lord said Australian companies would need to get used to the fact that new technologies were increasingly coming from Asia, rather than the familiar territory of the West.